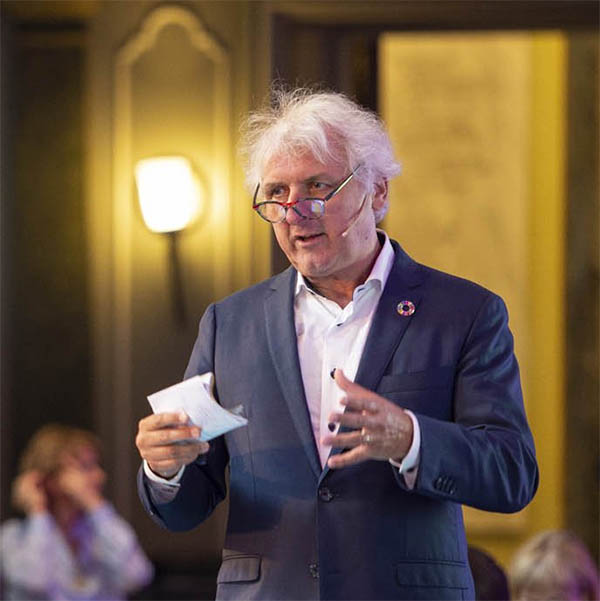 Prof. dr. Harry Hummels is Professor of Ethics, Organisations and Society at Maastricht University and is responsible for one of the MaastrichtMBA’s courses in the Sustainability & Business Ethics educational week. In Utrecht he holds a chair in Social Entrepreneurship, the first of its kind in the Netherlands. He studied Philosophy and Public Administration in Groningen and completed his PhD in the philosophy of work. He combines his philosophical background with a hands-on mentality as an entrepreneur, advisor, supervisor, educator, and former banker.

In 1999, just before the turn of the century, Harry Hummels and his friend and colleague Theo Brouwers started ING Bank Sustainable Investments. At the time Harry was Professor of Organisational Ethics at Nyenrode University but appreciated the opportunity for change. Why not have two jobs, and why not share one of them with your best friend? Harry and Theo pioneered in a time when sustainable investment was still the exclusive playground of ethical banks like Triodos in the Netherlands, the Cooperative Bank in the UK, or ethical and religious investors in the USA. That, however, gradually changed at the end of the 1990s when ING stepped in, followed by other mainstream banks. The development was supported by trade unions with a strong say in the policies and practices of pension fund boards. Slowly but surely, ‘for the times, they were a-changin’.

The concurrence of ethics and investment traces back to the Quakers in the 18th century. “Quakers like Lloyds, Barclays, Rowntree, Cadbury, or Clarks were strong business people, supporting efforts to create peace, equality of women and the abolishment of slavery”, Harry clarifies. In addition, they refused to invest in weapons trade, alcohol and tobacco. These first attempts resulted in a wider movement of religious groups, like the Mennonites and Anabaptists, that invested according to their ethical beliefs,” Harry explains: “What we now know as stakeholder engagement, started as shareholder activism at the time. The Quakers put their money where their mouth was. In the 1960s, ending workplace discrimination of blacks and the fight against anti-Apartheid were milestones in the investment-led campaigns of the influential Interfaith Center on Corporate Responsibility.

One can easily see why Harry Hummels is an excellent story-teller and educator, an amiable advisor with a wide ranging knowledge acquired in his career so far. By connecting people and organisations from all over the world, he helps to raise awareness as far as ethics, corporate responsibility and sustainable or impact investing are concerned. “However”, the pragmatist continues, “only results count”. Stories are helpful in eliciting change, but it is concrete actions that lead to progress. When Zembla, a Dutch investigative broadcasting programme, demonstrated in 2007 that Dutch pension funds invested in cluster munitions and landmines, it resulted in a public outcry. “But it was the initiative of the combined associations of pension funds that created change”, Harry remembers. He had the honour of becoming chairman of the pension fund committee that researched the issue and wrote the report, including recommendations for change. “We did not blame pension funds, but looked for ways how to improve the investment policies and practices of pension funds in line with their fiduciary responsibility”. The emphasis shifted towards a positive approach, asking pension funds to develop and publish a responsible investment policy, execute the policy and report to the fund’s participants and beneficiaries on its results.

Another positive in a complex world, is his commitment to social entrepreneurship as a member – and temporary chairman – of the Supervisory Board of Pluryn. The organisations is one of the largest care providers in the Netherlands for people with disabilities. Pluryn, however, reversed the way in which we perceive individuals whose behaviour and actions are hampered by mental or physical deficiencies. The question is: what is someone’s potential? What is his or her “zone of proximal development” – a term coined by Soviet psychologist Lev Vygotsky – referring to what a client can accomplish when nudged and supported by a skilled partner or caretaker. It was no surprise that Pluryn was one of the first organisations in the Netherlands to start a lunchroom in 1996 that was run by enabled clients of Pluryn suffering from mental disabilities. Since March 2018 Harry is co-founder and co-owner of a special initiative in his hometown Nijmegen, together with his friend Rob Beernink and with Frederik IJsseldijk, who also runs the business as the venture’s manager.

Restaurant Le Souk D’Orient opened its doors on March 1, 2018 and is located at Museumpark Orientalis. It is a limited liability company with a clear mission: running restaurants and other food and beverage outlets aimed at promoting the food culture from the Levant and integrating refugees by offering them jobs that allow them to fully participate in our society. The restaurant offers Mezze, the equivalent of Spanish tapas, which are characteristic for the Levantine cuisine. Besides this, Le Souk hosts cooking workshops in which customers interact with the refugees and catering services.
.
“Le Souk D’Orient is not so much a social enterprise,” says Harry, “but an enterprise with a clear social objective – and that is something different. We can only offer refugees an opportunity to integrate in our society if our business is run in a (financially) sustainable way. A sustainable and profitable business is a necessary condition for our social program.” Second, Harry believes that scale is required to achieve his objectives. “Without scale”, he clarifies, “the initiative becomes just a pet project – something we do on the side. It is only through growth that we can ultimately hire more refugees and hopefully even provide them with an opportunity to start their own Souk. Only then, we will have succeeded in creating true integration and participation. Therefore, it is our intention to create a chain of restaurants in different cities, hopefully also in Maastricht. Next to high quality cuisine and paid jobs for refugees, a third element in the proposed development of Le Souk D’Orient is cultural interaction between Dutch citizens and what we like to call “our new neighbours”. The entrepreneurs want to develop all sorts of events and programmes to improve mutual cultural understanding. Their cookbook 1001 Mezze Nijmegen does not only give an overview of the delicious Levantine cuisine but also presents the refugees in what they are: very capable and motivated people whose fate in life have brought them to the Netherlands and who want to make the best out of that – for themselves and for us as potential guests in Le Souk d’Orient.

The idea for Le Souk d’Orient is rooted in an Aristotelean tradition of creating and living the good life. Aristotle focused on our role in living a virtuous life in a constantly changing praxis. It is only by doing – by stepping into the agora of public life – that we understand the true meaning of cardinal virtues like wisdom (or prudence), justice, courage and temperance. It is with these virtues as signposts in a truly rewarding life that Harry understands that – paraphrasing psychologist Kurt Lewin – that nothing is as practical as a good philosophy.

Want to receive our brochure? Get your copy now!